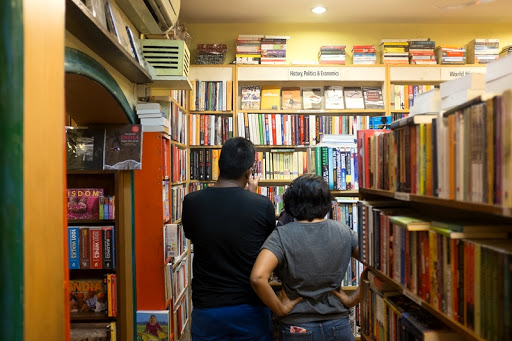 All India Survey on Higher Education (AISHE) was initiated in 2011 during which data for the year 2010-11 was collected. The survey was utmost necessary as none of the source of data on Higher education was giving complete picture of higher education in the country. For the first time all the major Stakeholders in Higher Education such as University Grants Commissions, All India Council for Technical Education, Medical Council of India as well as State Governments participated in the data collection exercise. The entire survey was conducted through electronic mode and a dedicated portal http://aishe.gov.in was developed for this purpose, thus making the exercise completely paperless.  The survey intended to cover all the Institutions in the country engaged in imparting the higher education. Data is being collected on several parameters such as teachers, student enrolment, programmes, examination results, education finance, infrastructure etc. Indicators of educational development such as Institution Density, Gross Enrolment Ratio, Pupil Teacher Ratio,
Gender Parity Index etc. are calculated from the data collected through AISHE. These are useful in making informed policy decisions and research for development of education sector. The survey is being conducted on annual basis. It is pertinent to mention that the results published in this report are based on number of institutions who have registered and uploaded their information in specially designed Data Capture Formats (DCFs). Thus, there is possibility that all Institutions of Higher Education may not have registered on AISHE 2017-18.

1.1 Steering Committee and Working Group: The XII Plan categorically highlighted the need for a strong current and comprehensive data for evidence-based policy making and effective planning. The Plan document also took note of the All India Survey on Higher Education initiated by the Ministry of Human Resource Development and indicated that it can provide useful insights and can be the first step towards creating a comprehensive higher education data management system.
Keeping this in view, a new plan scheme Higher Education Statistics and Public Information System (HESPIS) has been approved in XII Five Year Plan. With a view to ensure coordinated approach to all these efforts, particularly data collection efforts and benefit from synergy in such efforts, a Steering Committee for Higher Education Statistics and Public Information System has also been constituted under the chairmanship of Secretary (Higher Education), MHRD and different stake-holders as members. The notification on constitution of the Steering Committee and its Terms of Reference is given at Annexure-1.

1.2 The Central Sector Scheme: The scheme of Higher Education statistics and Public Information System (HESPIS) under which the survey is being conducted since 12th Five Year Plan has been extended for continuation upto 2019-20 by the Standing Finance Committee (SFC) with an out lay of Rs. 64.09 crore.

1.4 Reference Period for AISHE 2017-18:  Reference date for filling up the Data Capture Formats was 30th September 2017. The number of institutions, teachers and students has been recorded on the basis of their actual number as on 30th September 2017. Information in respect of Examination Result has been collected for the students passed out/awarded degree on or before 30th September, 2017 for the previous academic year. Financial Information has been recorded for the previous financial year i.e. 1st April, 2016 to 31st March, 2017.

Different colleges are regulated with different regulatory bodies. There are some colleges whose programmes are recognised by more than one regulatory body. To avoid such duplication or omission, University was identified as best source to prepare the list of colleges.

An online module has been developed to update the list of institutions. Apart from addition and deletion, module has been developed to affiliate and de-affiliate colleges which maintain the identity of the college even after shifting from one University to other. A provision has also been made for those colleges which are upgraded to University so that there is always a backward linkage.

1.7 Partner Agencies: Statistics Division of MHRD is primarily responsible for formulation and design of the survey, which includes preparation of DCF, providing training to nodal officers in workshops, engagement with National Informatics Centre (NIC) in software development etc. The software support was provided by NIC. Several regulatory authorities such as UGC, AICTE, MCI, etc. also took part by instructing their institutions for providing information in the survey.

Nodal officers in each State are expected to coordinate the survey work. Most of the States have nominated Higher/ Technical Education department as Nodal department/ agency for coordinating the Survey. Along with State nodal officers, 3 more nodal officers, one each from Directorate of Technical Education (for Polytechnics), SCERT (for DIETs and Teacher Training diploma level institutions) and State Nursing Council have also been designated to co-ordinate with Standalone Institutions. The names of these State Nodal officers and University Nodal Officers (Affiliating) are shown at Annexure-3 and Annexure-4 respectively.

1.8 Mode of Survey: A dedicated portal (http://aishe.gov.in) has been developed with the help of National Informatics Centre (NIC) for collection and compilation of the data. All the Institutions need to register on the portal for accessing the portal and uploading its data. The registrations of the Institutions are approved by appropriate level of officers at State/ Central Level and in case of colleges, by University nodal Officers. The e-version of DCF has been prepared in such a manner that it expands according to the structure/size (Number of Faculties/ Departments, Programmes, etc.) of the Institution. The Data Capture Format is downloaded from the portal, filled off-line and then filled-in DCF is uploaded, which has made it completely paper-less. DCF has been designed in such a manner that no manual aggregation is required at any level. No investigator is sent to the Institution to collect the data. In fact the nodal officers appointed by the Institutions themselves are the Investigator and they are responsible for filling up the DCF and uploading it on portal with an undertaking from head of the institutions. This eliminates the duplication of effort in data entry once form is uploaded by the Institution. Once data is uploaded by the Institutions, data compilation is done automatically in pre-designed formats. Filled-in DCFs are available on the portal, which can be seen by the Institutions and higher level authorities and can be modified, if required, till survey is open.

1.9 Duration of the Survey AISHE 2017-18: The survey was launched by Hon'ble Minister of Human Resource Development on 5th January, 2018. Data uploading started from that very first day of its launching and continued till 20th June 2018. One of its special features is that data, such as basic details, name of faculties/departments and list of programmes can be pre-filled in future survey DCF from the previously filled-in DCF with an option to edit pre-filled data. 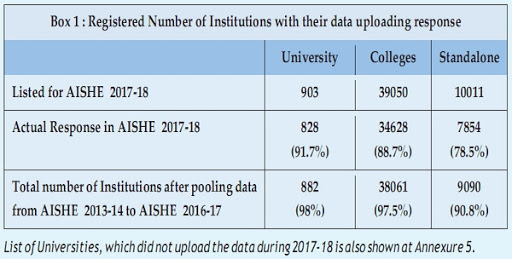 1.10 Institutions Uploaded Data under Survey: In AISHE 2017-18, 828 Universities, 34,628 Colleges and 7,854 Stand Alone Institution have uploaded the form on the portal. However, in addition to the actual response received during AISHE 2017-18, data has been pooled from the AISHE data uploaded during last five years of higher education institutions which existed in 2017-18 but could not upload the data in past previous years. So by pooling, the results are actually based on response from a larger number of institutions than the actual response of 2017-18 survey which can be seen from the following Table.
Was this article helpful? Yes -0 No -0379 Posted by: 👨 Ram Gopal Gulati